This group is involved in the synthesis of epitaxial superconducting thin films deposited on a substrate, and evaluation of crystal structure and microstructure together with the material properties of these thin films. Usually, the synthesis and characterizations, in this group, are carried out on cuprate-superconductors. In future, however, the deposition of epitaxial thin film of new superconducting material studied by other groups is also planned in order to collaborate with other groups and provide suitable samples for Physics Research. In addition, taking advantage of the thin-film deposition technique, the application of strain to the superconducting layer, formation of non-equilibrium phases, formation and control of surface and interface of two-dimensional material, and experiments using an electric field effect and intercalation will also be considered. Together with pulsed laser deposition technique, sputtering and chemical solution deposition methods are also used for the deposition of superconducting thin films. Thin film XRD and high-resolution TEM systems are successfully employed to evaluate the crystal structure and microstructures of the thin film samples. The as-deposited thin film sample are subjected to patterning using photolithography with wet chemical etching or laser etching for low temperature electrical transport measurements using a physical property measurement system.

Collaborative research with other teams

The main contribution of this team is to provide bulk and thin film samples as required in the high-pressure experiments and magnetic and electrical measurements conducted by Deguchi and Mito groups of the property evaluation team. Also, the deposition of epitaxial thin films will be carried out for novel bulk superconductors discovered by Matsuhira group of the synthesis team. In addition, this team will also provide the facility for evaluation of the physical properties of such samples. The theoretical team of Nakamura and Watanabe groups is expected to propose new superconductors and their crystal structures. Realization of such theoretical propositions will also be attempted experimentally by this team.

Our group has explored novel superconductors emerged by carrier doping for materials including valence skipper (Bi, Pb, Sn, etc.), and 5d electron Mott insulator (especially strongly correlated Ir oxide). In addition, thermal expansion measurement is carried out in order to study the effect of the pressure on the phase transition temperature. From the thermal expansion and specific heat measurements, by applying Ehrenfest’s second-order phase transition equation:

(1) Feedback to the synthesis from calculations of geometrical optimization and/or electrical structure by corroborating with theory team to seek much effective carrier doping way.
(2) Realize a hypothetical material from Theory group.
(3) Systematical characterization of the physical properties to obtain high Tc superconductivity or to enhance the superconductivity, by corroborating with Property evaluation team.
(3) Nitridation using ammonia reaction make it possible to corroborate within the same Synthesis team by applying it to nitride thin film. 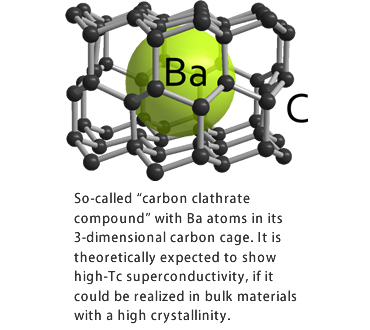 Superconductivity is a multi-body cooperative phenomenon of charge and spin. This multi-body phenomenon changes if the lattice is distorted, because all atoms in the lattice have some artificial perturbation. High-pressure experiment is a practical method for distorting the crystal lattice which can be used to manipulate the physical properties improving the functionality of the material. In recent years, the first-principles calculations are developed remarkably, and the synergetic effect of these calculations, together with the high-pressure experiments has led to the development of the new frontiers in superconductivity research.
High-pressure experiments are conducted not only to apply strain in a sample but also to apply giant strain in a material. Thus, subjecting superconducting materials under extreme environmental conditions to utilize the potential properties is expected to be very useful. In addition to obtaining structural information, such high-pressure experiments are very useful in making the design guidelines for high- Tc superconductors with the help of theoretical calculations. 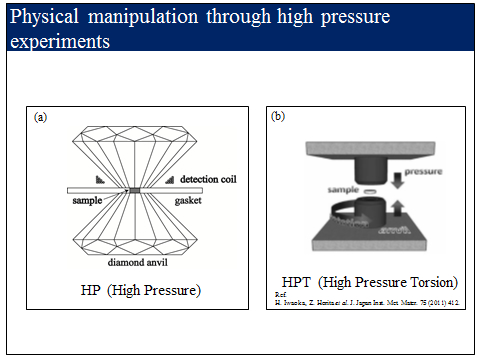 In association with Nakamura and Watanabe groups of the theory team and Matsumoto group of the synthesis team, we will conduct a systematic research on the physical properties of the superconducting materials subjected to lattice distortion by applying stress.

Cooperative relationship with other teams: For ceramic and thin film sample preparation, we will work with Matsumoto group of the synthesis team. In coordination with Watanabe and Nakamura groups of the theory team, a new physical property derived from the low magnetic field flux glass phase will be developed for the superconducting phase. 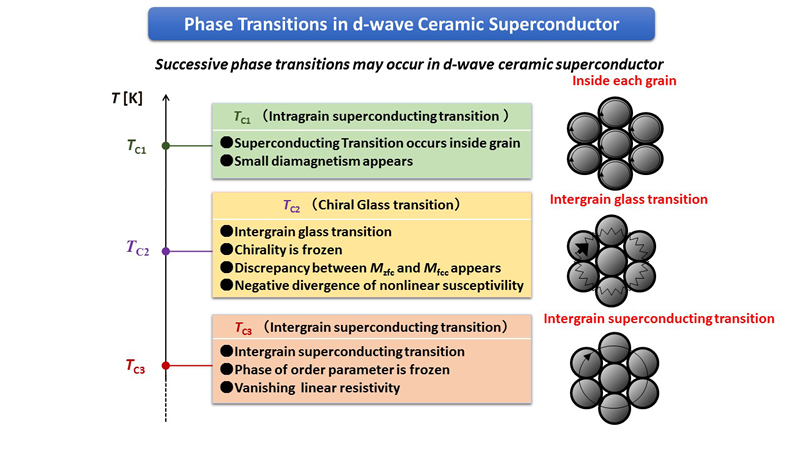 We develop first-principle calculation techniques and program codes to evaluate the superconducting transition temperature (Tc) of the real materials for theoretical material design and the superconducting mechanism elucidation. We analyze the correlation between crystal structure and calculated Tc data for various materials, which provides a theoretical guidance for the high-Tc superconductor search. In cooperation with the experimental groups, we aim at the discovery of the new high- Tc superconductors from Kyushu Institute of Technology.
The transition temperature Tc is estimated by the Macmillan formula
,

where is an electronic-phonon interaction parameter, is an effective electronic interaction parameter, and is the characteristic phonon frequency. From inputs of the crystal structure and the atomic number of the constituent elements of the material, the non-empirical evaluation of Tc is now possible with the help of the ab initio calculations using the above parameters. Recently discovered high-pressure hydrogen sulfide (Tc = 190 K) and monolayer iron-based superconductor (Tc = 50-60 K) are good targets in the initial stage of our study.
Cooperative relationship with other teams: We are intensively discussing with the members of the high-pressure physics team (Mito group) and the superconducting material synthesis team (Matsumoto and Matsuhira groups). We also collaborate with Deguchi and Watanabe groups for microscopic understanding of the superconducting transition mechanism.